It feels so good to be back on a bike trip. 🙂

I read a lot about how hard it was to find the mile zero mile post for the start of the C&O path and they weren’t kidding. I even studied the google map in details the night before. The thing that was throwing me off is that it felt like I was going through somebody’s personal property. I wasn’t going to start the trip without taking a photo with the stpuid mile post though so I stuck with it and finally found it. 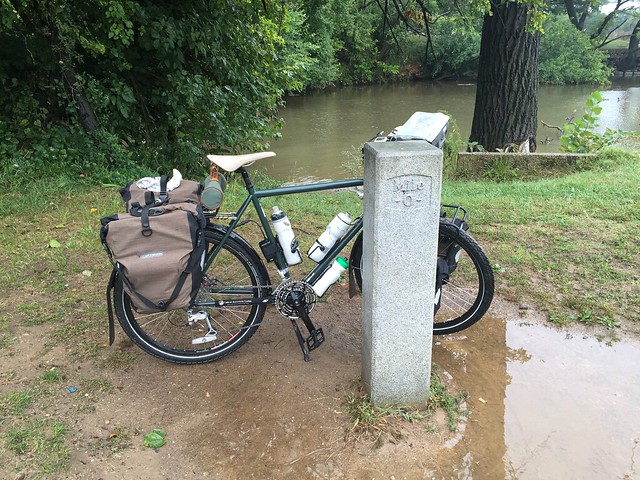 As you can see from the photo, conditions were pretty wet as it had been raining in the DC area for at least a couple days. More on that in  a minute.

The ride out of DC was pretty exciting. I was just so happy to be out on the road again. When I was started my Natchez Trace ride, it took about a half a day to get used to how the heavier bike felt. I never had that issue today as everything felt completely normal from the start. Yay muscle memory! 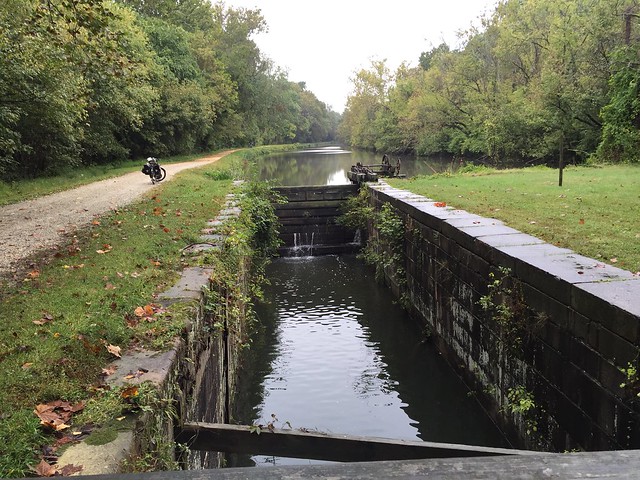 So the big thing about the C&O Canal Tow Path is that there are lots of locks and all the stuff that goes with said locks. There’s lots of interesting things to see and for the most part, it didn’t seem as monotonous to me as the Natchez Trace trip. 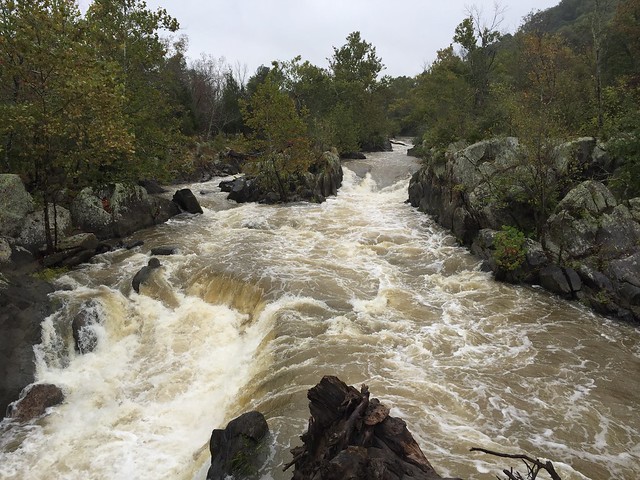 I missed my lunch stop and I was in a somewhat remote section fo the trail. By the time I got to White Ferry, it was nearly 3pm. I was at the point that if Whites Ferry didn’t have something hot to eat, I was about to bust out the JetBoil and a ChiliMac meal from the packs.

After lunch, I tried to pick up my pitiful pace so I could get to camp before night fall. I ended up making it but just barely! I ended up staying at a pay camp ground instead of one of the free hiker/biker camp grouns mostly because Brunswick advertised a camp shower. It wasn’t as scary as the camp shower experience on my Natchez Trace ride but it was still a camp ground camp shower. The hot didn’t seem to be working but I still rinsed the mud off and got cleaned up. It’s going to make a huge different sleeping tonight!

Overall, the ride was pretty good. It was a brisk, wet fall day and while that’s fun at first, it was getting old at the end of the day. I saw lots of wild life: squirrels, ducks, geese, a ground hog and so many deer, I stopped turning on the GoPro to film them.

The biggest thing that stuck out in my head is how much the wet and often muddy path affected my pace. I’m not a fast cyclist anyway but the mud really slowed me down. It’s fun the first few times but after the 200th time of getting caught in a rut and having to do a panic correction, it gets irritating.

So anyhoo, I’m here and I’m setup in camp. Low in the mid 40’s is forecast for tonight and it’s wet feeling and occasionally it’s windy. I’m expecting to sleep great, tucked away in my sleeping bag and tent! Off to read about tomorrows section!