First, let me talk about last night. The camp ground I stayed at last night was right next to a train track. When trains fly by at about 100 yards away from a person in a tent, it wakes you up no matter how tired you are. If it wasn’t the trains going by, I was rolling over or having to adjust temperature every 30-60 minutes. I was able to get some sleep but it wasn’t the most restful sleep in the world. I’m very tired tonight tho and I’m expecting to sleep a lot better. 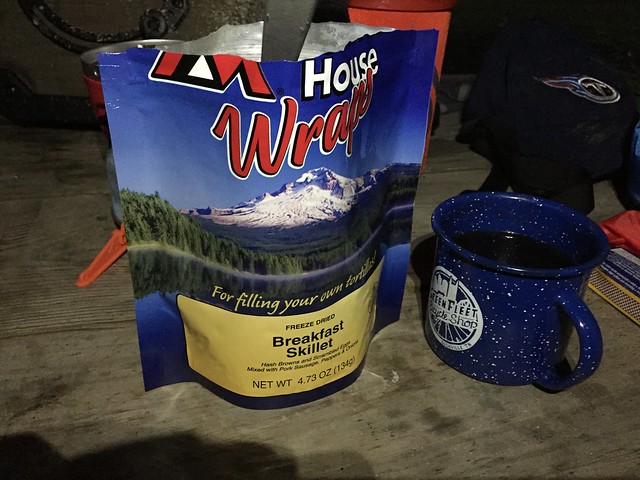 Breakfast of champions and yes, having french press coffee in the woods (or a camp ground near a train track if you prefer) was pretty damn legit. It tasted great and the french press attachment did pretty ok. There were a few grounds in the 2nd cup but I thought of it more like crunchy peanut butter. 😉 My plan for this morning was to get on the road, logging actual trail miles sooner than I did day 1 and I was successful at that. I was on the trail at 8:04am. I was also going to be mindful of my pace, making sure I wasn’t putzing around at normal Mike Harley effort. 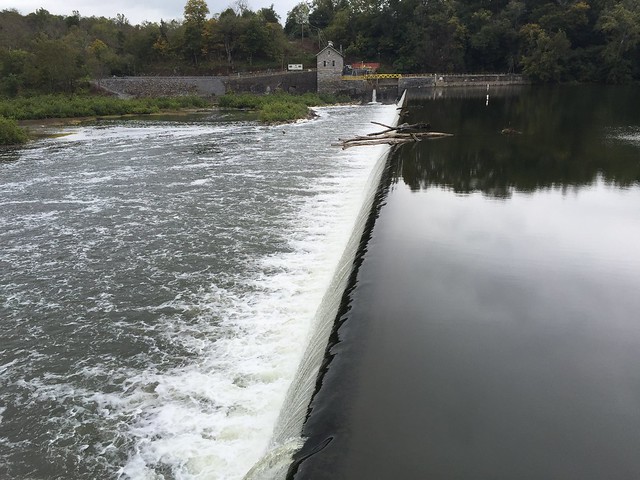 This morning more of the same from yesterday. Wet roads that were equal parts bumpy and muddy and the occasional cool thing to see.

Lunch plans was Captain Benders in Sharpsburg. The app said the place was an “easy ride from the tow path”. Well, I’ll have you know the person who wrote those words never rode a fully loaded touring bicycle up a damn hill. There were a couple steep climbs that I had to gear all the way down in the climbing gear.

I arrived a bit early, parked my bike and waited for them to open at noon. They let me in a little early but they couldn’t serve me. Whatever, thanks for letting me in out of the cold! The burger I had was decent; nothing to write home about. Also, I’m noticing the burgers up here are served with chips and fries are usually extra. 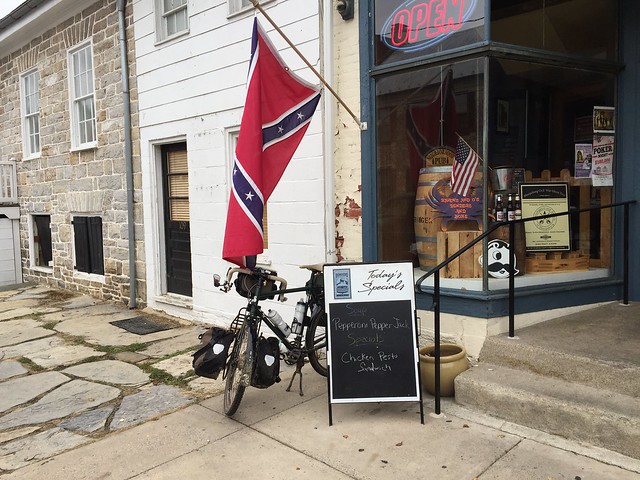 When I came out, I noticed that once the place opened, they put our their sign and flag pictured above. It honestly kind of blew my mind. I’d expect to see such things in the south by why here, near so many Civil War battle fields? These were Union states; it makes no sense. I asked the waitress what the deal with the Confederate flag was and her response was “Well, this is where it all happened and we’re just trying to protect our freedoms” – What lady? Come again? That makes no sense. Anyway, I didn’t want to push it and get any special sauce in my food or drink.

The good thing about having to climb up to get lunch was being able to coast down back to the trail!

I always dread the after lunch part of my days. It usually really sucks and today was no different. I don’t know what the deal is exactly… maybe it’s the fact that I just stuffed my face with meat and beer or maybe it’s a mental thing where I know my count down times have all reset or a combination of both. I call it riding on the pain train because you’re stuck alone in your own head with nothing but the discomfort (ouch, my hands hurt. ouch, my shoulders hurt. ouch, my legs hurt. 35 MORE MILES!?!?! /dies) 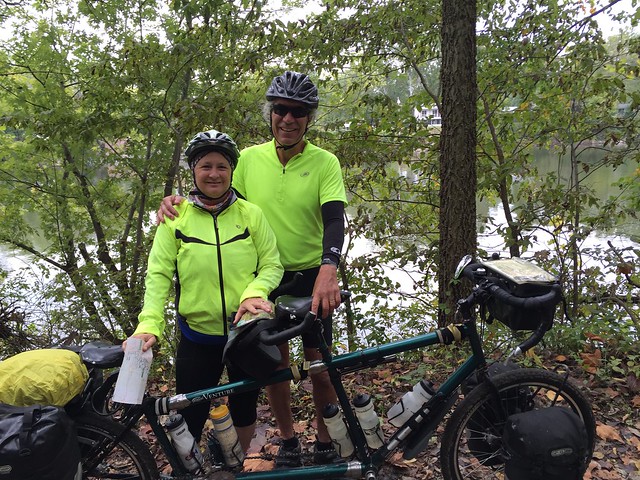 I pulled over to send complainy texts to Jen and Jessie, about how much bicycling sucks and I think I want to be a snowboarder instead when Rich and Sissy from South Carolina pulled up along side me riding a dang tandem! It was awesome! I’m trying to talk Jen into going on tours with me if I get us a tandem so this was perfect! We talked shop and compared notes and asked about gear and all that; it was great.

And this is where my afternoon really went downhill as I pulled off first and since I’m a dumb guy, I felt I needed to stay ahead of them. Well, if you know anything about bicycles, you also probably know tandems are faster than normal bikes because you have two dang people pedaling! So after about 20 minutes of me putting out maxium effort to stay head of them, my body blew a fuse and I bonked or something. My body let off the gas on it’s own accord and they passed me and something friendly but I don’t remember what they said. I was feeling jittery and shaky and cold all at the same time. Once they were out of sight, I stopped and took some water but I just couldn’t shake the weird feeling. I took a couple Gu shots and ate a couple handfuls of trailmix but it was 45 minutes or so before I was over the spell.

I limped along for another hour or so hating bicycling, bicycle touring and the C&O Tow Path. As the was getting lower in the sky it occured to me that it might be after dark before I get to my planned campa site. I used my phone to see if there was a motel nearby with every intention of getting a room but the only one was 4 miles behind me and Mike Harley doesn’t go backwards so that was out. The only option was pressing foreward to my original camp ground. And just like that, I had a second wind. I put some techno (dub? do kids still call it dub? maybe edm) on the iPhone and was able to maintain a faster pace for 1.5 hours of the evening than I’d been able to maintain on this trip. Hopefully that was my body finally getting the message that we’re on a dang bicycle tour here; stop slacking.

As I type this, I have camp setup, I’ve ate my ChiliMac and I’m just about done writing this blog post. Next, chit chat with the Jenmeister then scout out tomorrows lunch and camp locations plus check the weather. Good night.