Today was the hardest day of the trip so far – man am I pooped. I somehow goofed with the simple math of the milage estimation. I have in my notes that the ride was supposed to be 61 miles but it turned out to be 74. Combine that with the biggest climbing day of the trip and that makes for a long day.

I woke up this morning feeling really refreshed after sleeping in an actual bed. When I’m tent camping, I usually wake up hourly to roll over or regulate temp. At the motel, I went to sleep and didn’t wake up – or move apparently – until 4:30am. Wooo! I was packed and back on the trace a bit later than when I tent camp.

Shortly after leaving Tupelo, I met some more bike tourists and rode with them for a bit. Bob is from Cincinnati and Pat is from Louisville. They were both riding new Surly Truckers and it was pretty interesting to spend some time with them to compare gear and all that. Ultimately, I think they were interested in doing fewer miles than I but seeing all the stops. After we ate lunch together, they were going to spend some more time at the mound location we were at and looked to be getting ready to take a nap. I never saw them again today. Maybe I’ll run into them later but it’s doubtful IMO.

Speaking of lunch, this was supposed to be a market according to my guide book.

Instead, I ate trail-mix and an apple while sitting here. 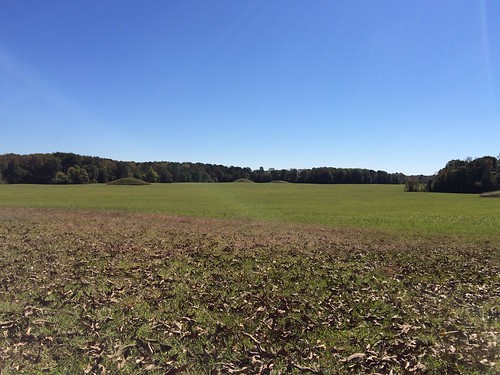 After lunch, the real hills began. Shortly after that, I started to have seat problems. Let me explain – I got a fancy Sella Anotomica, cut out, suspension, leather seat and it’s super nice… it looks great and feels (felt) great. The problem is that the seat has a weight limit of 250 lbs and I’m a bit north of that. While commuting 10 miles to work or farting around Nashville this hasn’t been an issue but it turns out, if you subject said seat to sweaty fat man ass for 6-7 hours a day for multiple days in a row, the seat just gives it up with “nope, nope, nope”. The problem is, the suspension part is sagging too much so the top of the seat post bolt is jabbing me right in the special place. Ouch. I made some road side adjustments with the adjustment bolt and jammed a hand towel in there and it’s better but I’m still feeling a lot of pressure. I have an idea to try in the morning with one of my spare tubes and the duck tape from my first aide kit.

When I was within 5-6 miles of camp, the trace was closed with a big detour sign posted. Being extremely exhausted, in pain and having no idea how many more miles – or hills – the detour was going to add to my trip, there was just no way in hell I was going to take the detour. As I was sitting there, contemplating what to do, a local man drove up and said that there was a sink hole and that I could get by it just fine. It turns out, he was exactly right and I think I would have died if another single inch would have been added to my day. 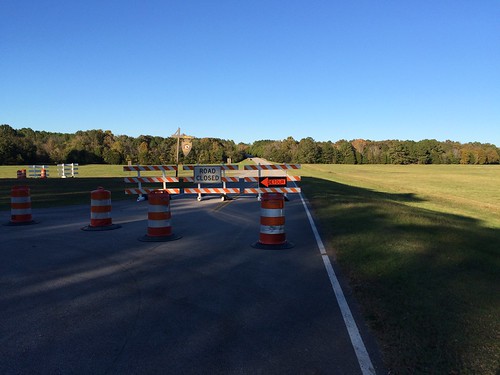 I rolled into Colbert Ferry (not pronounced like Steven Colbert I’m guessing) about 15 minutes before dark. There are no bathrooms or water close so you have to walk a good bit back up to the main road to the bathroom. So after hiking back up to the road to get water to cook with, I scarfed down my food, setup my tent and put everything inside in record time. There is one bicycle camper here (it’s a bicycle only camp ground) but he/she was already in the tent and zipped up for the night when I rolled in.

Besides the lack of water/bathroom access, there is also really bad cell service…. 1 bar/1x and I have to send things as text; I hope Jen got my messages.

Tomorrow is 59 miles – I double and triple checked using all my fingers and toes. Jen is meeting me tomorrow and she’s bringing the seat from my other bike. I really hope I can make it work tomorrow to do the 59 miles without permanently damaging the important bits. It’ll be super nice to see Jen and have her camp with me! Weee!