I’m a gear head so I wanted to jot down my thoughts on my gear while it’s still relatively fresh in my head. 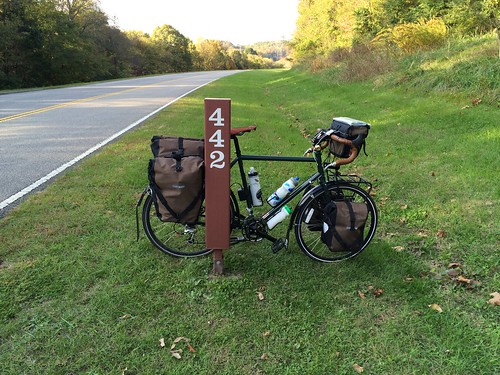 My Surly Disc Trucker worked great! This is the bike I ride around Nashville nearly every day so I was very familiar with the geometry and gear shifting and all those things. I had two mechanical issues. First, I must have bumped the rear derailer out of whack because about 3/4th through the 2nd day of riding, I only had access to the low range. Trying to shift beyond 4th gear, resulted in the shifter cable going to slack. I was able to use my front chain ring to get into higher ratios when needed. Second, I broke the seat rail on my Selle Anatomica seat! I was able to jerry rig the seat in such a way that it’s still ok. I plan to check out a Brooks seat when I’m ready to for another seat (i.e., when I can no longer jerry rig the seat!)

Prior to my trip, I installed the 3rd water bottle to the bike and I’m really glad I did as I used the 3rd water every single day. In fact, I even ran out on at least one day. I think I’d like to figure out a way to get 4 bottles on the bike for touring.

My Ortlieb panniers worked great. I had perfect weather for my trip so I didn’t get to test their weather proofiness. It took me a minute to get used to the map case but by the end of the trip, I was a pro at changing out to the next map panel! 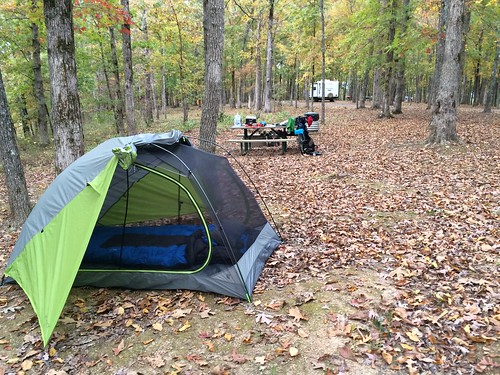 I’m pretty happy with the sleep system. I don’t have a lot of experience with ultralight camping but my feelings are that this is on the heavy side. Jen purchased a new Big Agnes bag and mat and I was kind of jealous of her ultralight mat. It was lighter, thicker and more insulating than my Exped. I think overall, my system is pretty great for bicycle touring/camping though.

I was pretty apprehensive about keeping my iPhone charged for the whole trip because I was trying to run Strava to track my rides. Using a combination of the Mophie Powerstation and using power plugs when available, I was never in the danger zone of my phone going dead. Prior to the ride, I even debated on the battery vs solar charger but now I know the answer is both. Having the little travel surge protector was pretty nice but also having the option of the solar charger would have been a little extra bit of security blanket to make me feel better.

I only used my lights a few times and never for very long so I never had to charge the light batteries.

Cell coverage wasn’t as bad as I was expecting from reading other people’s journals of their trips but it wasn’t 100% either. There were lots of low signal and that caused the battery to drain faster than it does while running Strava riding around Nashville.

I brought my Kindle and even bought a book to read but I never once cracked open the Kindle to read. By the time I rode the long miles of the day, setup camp, ate dinner, got cleaned up and laid down I was just too tired to try to read.

My headlamp was one of the most useful bits of equipment during the evenings/nights. I’d basically just sleep with the thing on my head  so I could have quick and easy access to lights in the night.

I brought my GoPro on the trip and got some really good footage. I even bought a handlebar mount with the intention of moving the mount around in order to get lots of different angles during my trip. The handlebar mount spent the whole time on the left side, lower drop and I only used it to record footage a few times. The rest of the time the GoPro was on my head. I didn’t have much trouble keeping it charged as I used it sparingly. 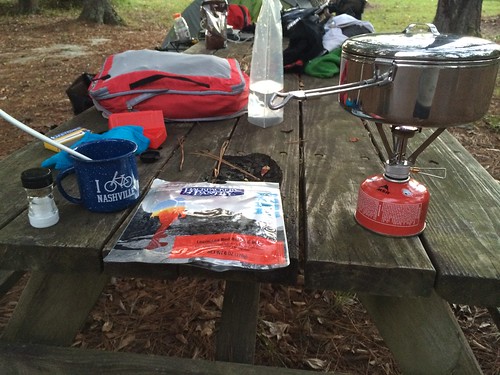 My cook system was adequate if kind of hodge podge. I used the Platypus bladder a lot and really loved it. It holds enough water that I was able to make a single trip to the water source for the evening/morning. I could then cook and drink everything I needed. The pot and stuff was a bit bulky and I think I’ll upgrade to a JetBoil Sol system for the next trip. The JetBoil system comes with a french press attachment so that I can cook and make coffee with the same pot. That’s pretty big for me because coffee was the single biggest thing I missed on my trip during breakfast. It’s all a combined system too to save on space/bulk.

The food situation was perfectly adequate. I brought 5 Mountain House Breakfast Skillet meals for breakfast and 6 Backpacker’s Pantry Louisiana Red Beans and Rice meals. I also brought some tortillas to make myself burritos for breakfast and dinner but they were so delicious that that were all gone by the end of day 2. They’re kind of heavy but I wish I would have brought more because eating was one of the more enjoyable things to do on the trips. In retrospect, I think I would have either brought enough tortillas for the whole trip or added some variety to meals, especially for dinner.

I also brought some miscellaneous stuff like ramen noodles (thought of this as emergency food in case I couldn’t find a lunch destination), instant oatmeal (in case I got bored with the Mountain House meals; I didn’t) a big bag of trail mix and Gu energy shots.

Pre-trip, I envisioned taking sink baths when showers weren’t available. It turns out that I only had two showers on the trip. The first one was an extremely sketchy “shower house” at Ratliff Ferry on day 2. The other shower was at the motel in Tupelo on the evening of day 4. The sink bath things didn’t exactly work out as well as I envisioned honestly. I just felt super awkward, standing there at the sink in my undies at the busy camp grounds as I washed all the things. More often than not, I’d retreat to the large bathroom stall with special camp wet wipes that I picked up from the camping section at Wal-mart.

I also envisioned washing clothes in the sinks. I hunted around Nashville until I finally found the flat, sink stopper that would fit nearly all sinks. I purchased these little laundry sheet things from REI to wash with too. I only did laundry one night. Hand washing clothes in a sink isn’t so bad but I struggled to wring out enough water so the clothes seemed pretty wet. The clothes line I bought at REI didn’t really work for shit as it was more designed for motels than stringing between trees I think. I just happened to have another roll of cord that I ended up using to rig up a clothes line but when morning came, the clothes were still very wet. It took most of the day strapped onto my panniers to get fully dry. I brought two full sets of bike clothes, plus some knickers for cooler weather so doing the single wash and switching out between all my clothes, I don’t think I got too ripe though I was very salty. If I were doing a longer trip, the seventh day would have been a down day for rest and laundry at a laundry mat. After changing into my camp clothes, I’d just drape the current days clothes on the bike to air out and that seemed to work fine. I think I’d ditch this whole idea of washing clothes in sinks for trips of 7 days or under.

Speaking of camp clothes, I was very happy with what I brought. I brought a pair of cotton boxer briefs that I normally wear, a white cotton undershirt, a pair of elastic band Nike athletic shorts, my Nashville Zoo hoodie and a pair of water specific flip flops that I planned to use for camp/shower shoes (and they worked great in this role).